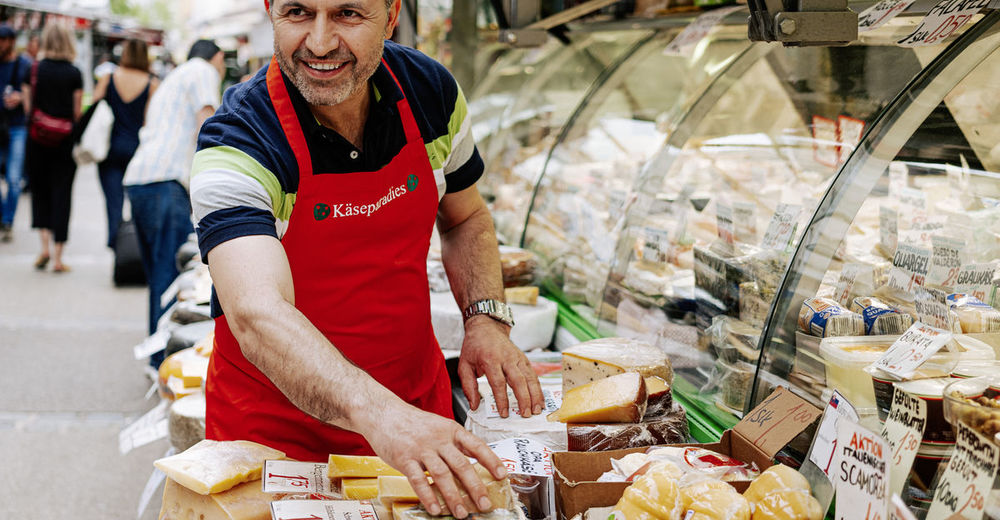 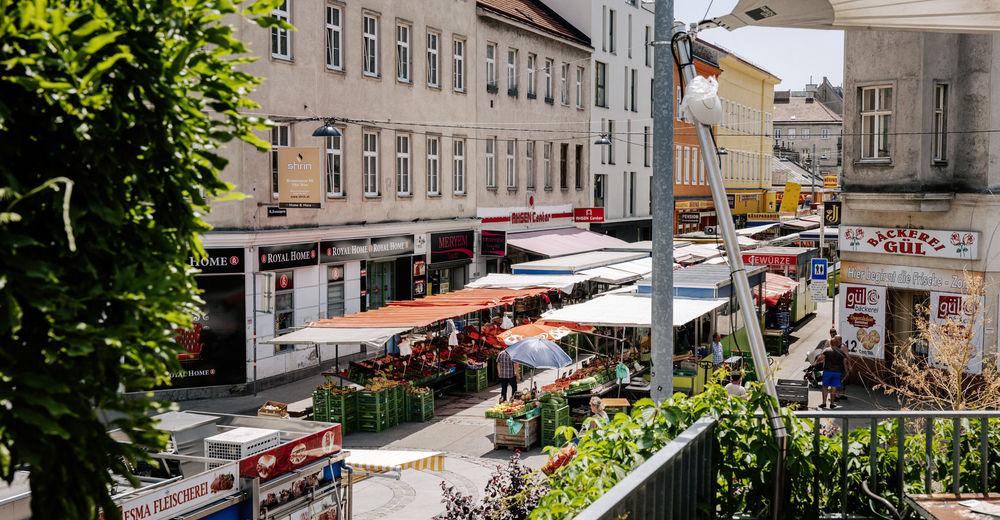 The quarter around Yppenplatz is one of the most colourful areas in the whole of Vienna. Its lifeline is the Brunnenmarkt, with more than 170 market stalls between Thaliastraße and Ottakringer Straße it is the largest street market in Vienna. Almost seamlessly connected to it is the Yppenplatz - here the market consists of fixed pavilions.

A colourful and booming district has developed around the Brunnenmarkt in Ottakring, the 16th district. The market itself exudes southern flair. Many artists have set up their quarters in the surrounding area, making the Brunnenmarkt and the adjacent Yppenmarkt one of the busiest districts in the city. New venues are constantly opening around Yppenplatz. Crisp vegetables, fresh fish, exotic spices and fair prices, combined with the multicultural hustle and bustle of the Brunnenmarkt, create a creative and relaxed atmosphere.

At Yppenplatz there is also free public WLAN.

The Café C.I. was one of the first locations of the Yppenmarkt, which has existed since 1897. It quickly became a meeting place for people from all over the world, the square in front of it a summer garden for guests. Since then, one restaurant opening follows the other on Yppenplatz. Right next door, the Cay (short for: Café am Yppenplatz) is a very pretty coffee house that also offers good food - as does the Café Frida next door. Over the Piazza the view wanders to the scene meeting An-Do. A lot of glass and a simple modern architecture, good service and a proven food offer make the restaurant special.

The Wirr am Brunnenmarkt is a sister restaurant of the restaurant club of the same name in the Burggasse. At the Brunnenmarkt you can enjoy international cuisine and it is the only restaurant with a roof terrace on a market stand - with a view of the colourful market hustle and bustle and cool music. The Vinothek & Weinbar Truksitz invites you to a glass of wine in a cosy atmosphere. The wine bar sets great store by Austrian wines, including, of course, from its own vineyard in Burgenland and wine from Viennese vintners.

The restaurant Ludwig & Adele am Markt has moved into the former market office on Yppenplatz. On Friday and Saturday there is a market breakfast, otherwise the culinary delights of the restaurant, which has been modernly adapted with lots of glass and wood, revolve around great focaccia. The beer comes from the Brauwerk, the creative brewery of Ottakringer. In La Salvia, the focus is on delicacies from Trieste and Istria - whether pasta, sausage or wine. Inside this market stall there are a few seats - in the summer, there is also a beer garden.

Along the Yppenplatz you will go to Wetter, a former launderette, which Raetus Wetter made into one of the most exciting places in town. He integrated apparent optical flaws into the concept, laid a rubber floor and installed a bar in industrial design. But the most important thing is the cuisine: Wetter cooks Ligurian cuisine, which is rarely found north of the Alps. The Dellago also specializes in Italian cuisine.

A classic is the Restaurant Kent, whose Turkish home-style cooking and huge guest garden attract card-playing Turks as well as young people from the scene. The Völlerei is a modern inn with old wood panelling and offers classic Austrian dishes with an innovative touch.

The Staud's Pavillon is a must visit at the Yppenmarkt. Johanna Staud has been selling jams and vegetable delicacies here since 1947. Her son Hans has carefully renewed the Staud's brand and established it as a synonym for fine jams.